Rally Together with Dalianliz Rosado 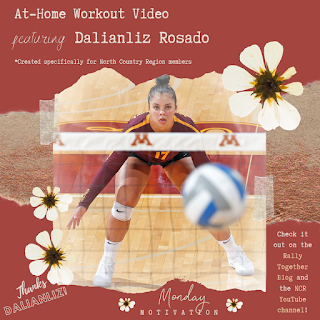 Looking for some Monday Motivation?  A workout created just for our North Country Region members by former Gopher libero, Dalianliz Rosado, is just what you need!  Dalianliz has put together a challenging workout just for you ~ don't miss out on this one.

Prior to becoming a four year starter for the Minnesota Golden Gophers, Dalianliz Rosado graduated from Carmen Sol in Puerto Rico, where she also played for Club Morovis and competed alongside Daly Santana on the Puerto Rico Youth National Team.  During her career at Minnesota, Dalianliz accumulated an impressive 1,870 digs, ranking her third in Gopher history for career digs.

After graduating from the University of Minnesota, Dalianliz joined Gopher teammate Daly Santana on the Puerto Rico Women's National Team competing in the FIVB Challenger Cup in 2018.  In the spring of 2019 while studying for her Masters, Dalianliz was a part of the University of New Mexico Lobos beach team where she and her teammate, Lauren Twitty, finished the season with a remarkable 19-5 record.

Most recently, Dalianliz has been selected to the Indias de Mayagüez squad, a part of the professional league in Puerto Rico, the Liga de Voleibol Superior Femenino.

A huge shout out and thank you to Dalianliz for taking the time to create something just for North Country Region and our members!